LYLE LOVETT
A singer, composer and actor, Lyle Lovett has broadened the definition of American music in a career that spans 14 albums. Coupled with his gift for storytelling, the Texas-based musician fuses elements of country, swing, jazz, folk, gospel and blues in a convention-defying manner that breaks down barriers. Whether touring as a ‘Duo’ or with his ‘Acoustic Group’ or his ‘Large Band’, Lovett’s live performances show not only the breadth of this Texas legend’s deep talents, but also the diversity of his influences, making him one of the most compelling and captivating musicians in popular music. Since his self-titled debut in 1986, Lyle Lovett has evolved into one of music’s most vibrant and iconic performers. Among his many accolades, besides the four Grammy Awards, he was given the Americana Music Association’s inaugural Trailblazer Award, and was named Texas State Musician. His works, rich and eclectic, are some of the most beloved of any artist working today.

JOHN HIATT
John Hiatt has always been a keen observer of life’s flings and foibles alike. Usually mixed well together,
Hiatt’s insights and skills at sharing them have only sharpened over the years. He recently released his 22nd studio album, Terms of My Surrender, forty years into his recording career. Along the way, his songs have attracted many other singers, through whom some have gained a wider world of fans via other artists’ versions, such as Rosanne Cash’s “Pink Bedroom” and most famously Bonnie Raitt’s hit version of “Thing Called Love.” Hiatt’s series of shows with Lyle Lovett, which he calls “our little Smothers Brothers comedy show,” has brought out other spins on his art, as well as elements already familiar to those who’ve been there all along. Alternately bemused and profound, Hiatt is a selfaware chronicler of both his own and others’ stumbles and epiphanies, the tales richer with each step forward. 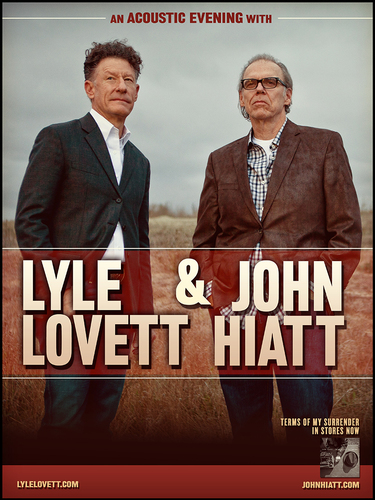